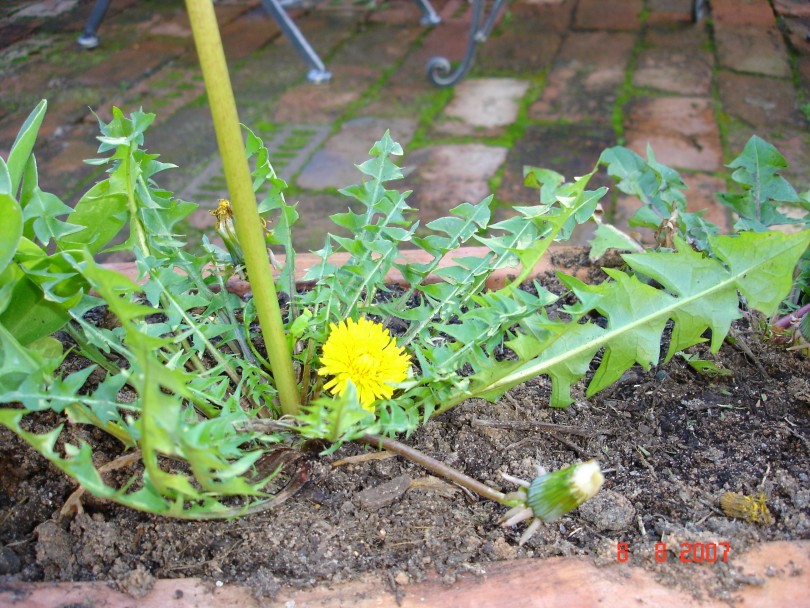 I have had discussion of late about the wonders of the herb Dandelion.

Here is the link if you would like to learn more.

The leaves and root of dandelion are used, leaves picked during flowering and root dug up only during autumn. Dandelion greens, gathered in the spring when young and tender, are delicious raw in salads or pot-boiled or steamed like spinach. They are very nutritious, being high in vitamins C, D and A, and in potassium, calcium and iron.

Dandelion is commonly used as a food. The leaves are used in salads and teas, while the roots are often used as a coffee substitute.

Dandelion leaves and roots have been used for hundreds of years to treat liver, gallbladder, kidney, and joint problems. In some countries, dandelion is considered a blood purifier and is used for ailments such as eczema and cancer. Dandelion has also been used historically to treat poor digestion, water retention, and diseases of the liver, including hepatitis. Common dandelion originated in Europe, and moved as the first European settlers did.

The common name Piss-in-bed, which comes from the French word ‘pissenlit’, indicates the herb’s habit of giving the kidneys the urge to expel urine. Women who find they puff up at the time of menstruation, may get considerable relief from bloating and breast tenderness, by drinking dandelion leaf tea, as soon as they feel these symptoms.

Dandelion has two particularly important uses: to promote the formation of bile and to remove excess water from the body. Extracts of the milky juice make a powerful diuretic that reduces high blood pressure. Dandelion leaf is high in vitamins and minerals, and is a safe, gentle, effective diuretic. It is also nutritive and restorative to the liver (especially the root) and a mild blood cleanser.

Dandelion leaves are widely recommended as a food supplement for pregnant women because of the many nutrients they contain. It therefore has beneficial effect on the female organs. It increases the activity of the liver, pancreas, and spleen, especially in enlargement of the liver and the spleen.

The root affects all forms of secretion and excretion from the body. It acts as a tonic and stimulant by removing toxins and poisons from the body. An infusion of the fresh root is reportedly good for gallstones, jaundice, and other liver problems.

It increases the flow of urine in patients with liver problems. It is slightly laxative. It is a remedy for jaundice and skin diseases, scurvy, scrofula, and eczema. Dandelion leaf is useful in all kinds of kidney troubles, diabetes, dropsy, inflammation of the bowels, indigestion, flatulence (relieves gas), appetite stimulant, laxative, skin problems, psoriasis, eczema, arthritis, PMS bloating and fever.

It is a multi-talented and functional herb.

If you want to buy dandelion leaf, you can purchase in bags as small as 100g

if it is dandelion root you are after here it is

As a mild diuretic or appetite stimulant, 4-10 grams of dried leaves can be added to 250 ml (I cup) of boiling water and drunk as a decoction. A decoction is a simmered tea.

Juice: For a springtime tonic, take 1 tsp. Juice pressed from the leaves in milk, one to three times a day. Use an electric vegetable juicer to extract the milk.

We all love dandelion, great for young and old.