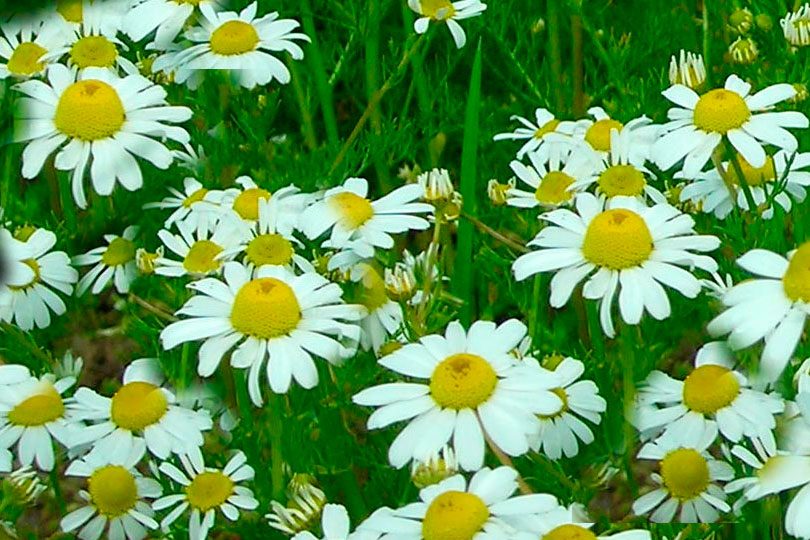 Does Chamomile Heal All?

For centuries, people around the world have turned to chamomile herbal tea as a cure-all for a multitude of physical and emotional health concerns.

Roman Chamomile is a creeping rhizome that is low growing. It has hairy stems and finely divided alternate leaves. The terminal, single flower heads are usually white with a yellow centre, or occasionally double forms occur.

German chamomile is rarer in the cooler parts of Europe. It has an erect stem with finely divided feathery leaves. The terminal flower heads have white florets and yellow central disc florets. The whole plant is aromatic.

Chamomile tea was used by the Greeks, Romans, and Egyptians as an ointment to expedite healing. In a recent study, rats given chamomile tea healed faster than those who were not given the elixir.

It is grown from seed in early spring or autumn.

The flower heads are harvested prior to and at full flowering. They are not to be harvested wet and not dried at too high temperatures.

Volatile oils (including bisabolol, bisabolol oxides A and B, and matricin) as well as flavonoids (particularly a compound called apinegin)

Chamomile is a great relaxing and sedating herb that can be used for both young and old, it can safely been used for infants and children. The effects of the tea are cumulative and can be used for all ailments such as stress to menstrual cramps.

Chamomile reduces cramping and pain in the bowels and also helps to relieve excessive gas and bloating in the intestines.

Chamomile is know to act the same parts of the brain as anti-anxiolytics, hence why it has deemed to so effective for treatment of stress. It helps with conditions such as insomnia.

It’s anti-inflammatory actions make it valuable for treating conditions such as bowel spasm, diverticulitis and inflammatory bowel disease disorders such as Crohn’s disease. The antibacterial effects of drinking chamomile tea can help to prevent and treat colds while protecting against bacterial-related illness and infection.

Some research has shown that chamomile can help those who are suffering from diabetes. It also helps with hyperglycemia.

Used as a lotion it is great for sunburn, as well as relieving the itch of eczema and other inflamed skin rashes. It increases healing of bacterial infections both internally and externally.

Chamomile is a wonderful cure for migraines. Take a cup of tea when you start noticing the symptoms of a migraine headache. It works best if you take it before the headache actually gets severe.

It can be used as a compress on tired eyes, and to help in the treatment of conjunctivitis. Certainly a multifunctional herb.

One use of chamomile that is often forgotten is that it can be used to treat other failing or ailing plants. A tea can be made and given to the weak plant, or just putting a chamomile close by will encourage plant healing. It also helps to keep other plants free from bees, as bees do not like it.

Chamomile has been found to be advantageous for lightening your skin tone. Simply bring two quarts of water to a boil with 2 chamomile tea bags in it. Then place your face above the steaming pot of chamomile tea.

If you’ve been feeling anxious, stressed, or depressed, you may find soothing relief in a cup of chamomile tea. Steep a cup, and inhale its wonderful fragrance for some beneficial aromatherapy, and then feel your anxiety and worry melt away as you sip this delicious brew. Make it a part of your daily routine for full, long-lasting benefits.

The essential oil has been known to cause anaphylactic shock. Large doses of the Roman chamomile have been reported to cause colic. CI with those who have daisy sensitivities.