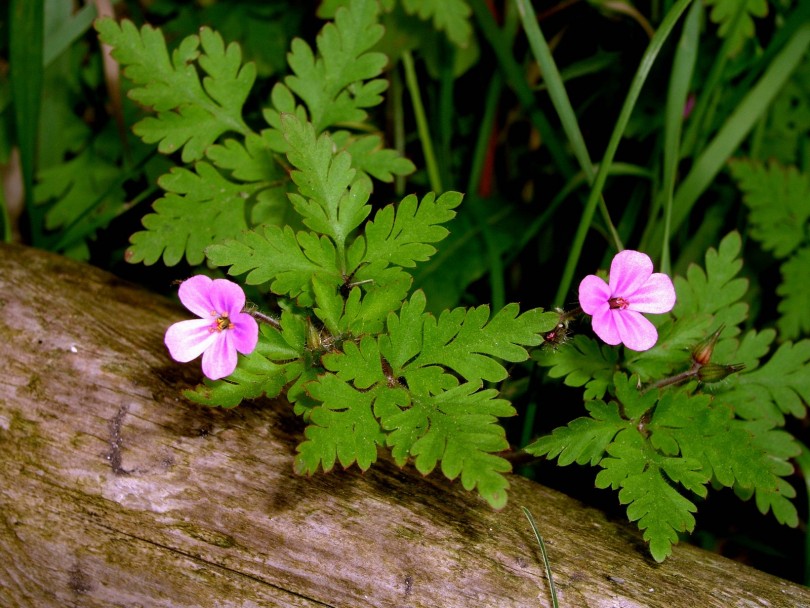 History:   The plant was first identified as being used in ancient times as a cure for cancer. It was traditionally used for toothache and nose bleeds.

Description – It can grow at altitudes of up to 1,500 metres (4,921 ft). It grows as an annual or biennial producing small, pink, five-petalled flowers (about 1 cm in diameter) from April until the autumn. The leaves are fern-like, and the stems often reddish; the leaves too turn red at the end of the flowering season. The plant has little root structure.

Propagation – Will propagate easily by seed. Best grown as a winter annual. Plants grow well in shady, damp places being able to grow quickly and flower profusely. It will readily self seed. It requires shade from the strong sun and it does not like to dry out. If the leaves are picked regularly, then it will produce a bounty of leaves . It must be watered and fed regularly.

Active Compounds – Tannins, bitters and essential oils. Ellagic acid. It contain significant amounts of Vitamins A, B and C as well as minerals calcium, potassium, magnesium, iron, phosphorus and geranium.

Indications –  As a good source of germanium it has the ability to make oxygen available to the cells. This then enables the cell to fight disease more efficiently and hence has been found valuable in the treatments of cancers. Herb Robert also contains ellagic acid. Researchers have found ellagic acid may slow growth of tumours caused by certain carcinogens; and it has been used to fight and prevent cancer.

The body can create an environment with a lack of oxygen by exposure to free radicals. This creates an anaerobic environment which can lead to all manner of serious and degenerative diseases. Germanium works not only as a oxygen carrier it also works as a catalyst which stimulates electrical impulses at a cellular level.

Herb Robert has a potent effect on the immune system as an energy builder, an immune builder, as a cancer preventative and as a post chemotherapy tonic, as a vigorous adaptogen as well as being anti-oxidant and antiviral.

There are documented stories of people with confirmed bowel cancer who used Herb Robert in powdered form and she mixed the herb with raw egg, she then took this and was healed. There are other records of people being cured of bowel cancer, lung cancer, breast and uterus cancer who have been healed within weeks using Herb Robert.

There are many other storied from Isabell Shipard, a Herbalist from Queensland and you can read more about Herb Robert in her book  ‘How can I use herbs in my daily life”

Stories from Isabell’s book and I quote

“Adam called to tell me he had been diagnosed with advanced bowel cancer and his doctor told him to go away and die. He had been told about Herb Robert and started taking the herb daily. His cancer is now in remission. “

“A lady in Brisbane, was very sick with cancer, but was not told the full extent of her condition. She started on a regime of raw foods, herb Robert and wheatgrass juice. Sometime later the doctor admitted her to hospital and put her through many X-rays. Eventually the doctor told her the reason for the X-rays. Previous X-rays has shown extensive cancer of the spine and lymph nodes. The new X-rays did not show one sign of cancer. Lee said the doctor gave her a bit of unconventional advice … to continue what you are doing. Lee said she was using 2 tsp of herb Robert with raw egg yolk every morning.”

“I well remember a lady with cancer of the mouth (she had been a smoker), who heard about Herb Robert from her sister, when she went to Brisbane to join in a herb course. She started making the herb as an infusion; gargling the warm tea and the swallowing it. The specialist was baffled at her next visit. She now lives in full health.”

An infusion made from the whole plant, minus the root, has been used for its diuretic and tonic effect and as a remedy for dysentery. It is also used on wounds for healing and to prevent scarring, having both an antiseptic and a styptic effect. Freshly picked leaves have an odor resembling burning tires when crushed, and if they are rubbed on the body the smell is said to repel mosquitoes.

Dosage – Infusion: Pour a cup of boiling water onto 1 teaspoonful of the dried herb and leave to infuse for l0-l5 minutes. This should be drunk three times a day.

Tincture: take l-2ml of the tincture three times a day.